30th March is World Day for the End of Fishing and a great day to give up eating fish!

The fishing industry is one of the greatest pressures on the marine environment and the animals living within it, but you may not know that it also causes extreme suffering and pain to intelligent sentient beings, in their trillions.

It is widely accepted that fish are able to feel fear, pain and distress – just like your dog or cat – and therefore suffer considerably during capture, landing and processing. Being chased to exhaustion, crushed under the weight of other fish in nets, quickly raised from deep water and suffering decompression effects (such as burst swim bladders), being caught and confined, spiked, impaled alive on hooks and thrown live to other fish as bait are all legal, standard practice in commercial fishing.

Fish are often held after capture for hours or days, many dying or being fatally injured during this process. Most fish are either left to suffocate or die during post-capture processing, which might include gutting, filleting and/or freezing while alive and fully conscious. Some fish may be slaughtered using methods that are deemed as more humane, for example by a blow to the head or with a sharp instrument quickly inserted into their brain, but the vast majority are subject to a drawn out, painful death.

It is estimated that up to three trillion fish are caught each year and suffer in the way described. This makes commercial fishing a major animal welfare issue!

We can help fish avoid this suffering by simply not eating them. As the demand for fish reduces, so will the number of animals suffering. We just need to leave fish off our plates and instead try some of the incredible products in the supermarket that mimic the taste and texture of fish perfectly, like the brand new vegan salmon and shrimp on sale in Sainsbury’s from Sophie’s Kitchen. Or try making some fish alternatives at home with cheap simple ingredients like carrots and chickpeas! 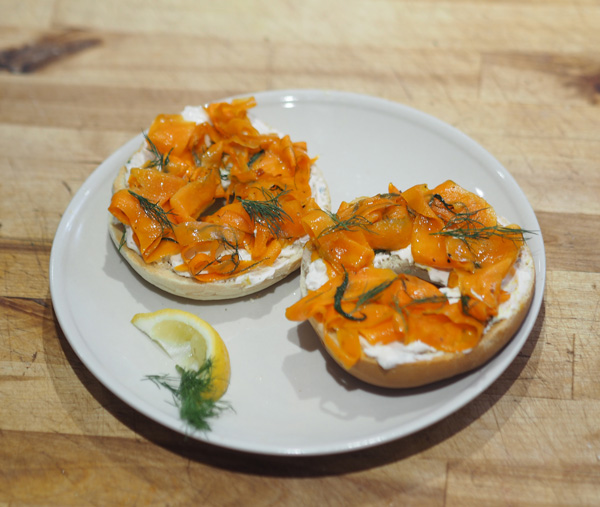 This carrot smoked salmon is totally mind-blowing. The flavour and texture will absolutely fool you. We served it with Nush almond milk chive cream cheese on a toasted bagel and we’re sure nobody would know it wasn’t the real thing. It’s really easy and cheap to make too, totally worth it.

And even easier is our chickpea tuna! Just a few cheap ingredients that you can get from any supermarket can turn a can of chickpeas into a tuna alternative that you won’t believe! Check out our recipe and give it a go.

If eating delicious fish alternatives is this easy and means you’re sparing fish from suffering, it’s a no-brainer, right?! Tell us what you thought of our recipes in the comments below.