Julia’s story is heart-wrenching and shattering. The suffering this lovely sow had to endure is beyond imagination, and yet it is the norm on modern British pig farms.

Julia was impregnated over and over again. A few days before each birth, she was forced into a narrow metal farrowing crate which was so small she could not even turn around. There, on the cold concrete floor, her piglets were born. She knew them only for a few weeks before they were taken away from her, and she was made pregnant again.

Her little ones had to endure painful procedures, such as having their curly tails cut off, and their teeth clipped – all without anaesthesia. The suffering these intelligent and sensitive creatures had to endure is hard to imagine. 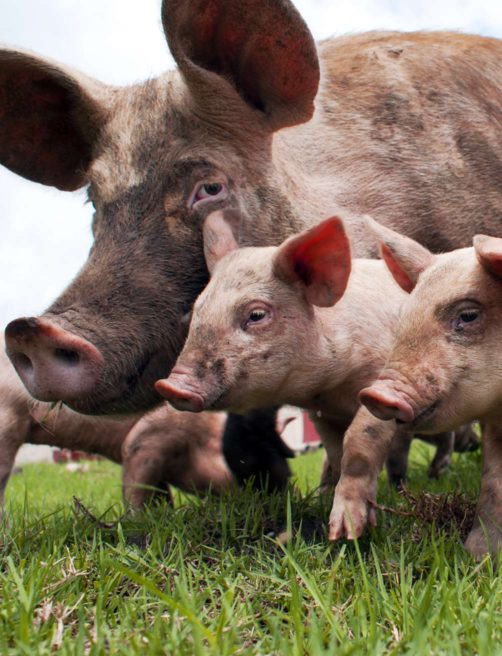 But Julia was lucky. After it was exposed that this heavily pregnant sow had been beaten and kicked by a farm worker, committed animal lovers rescued Julia. And now she lives with her 16 beautiful piglets at Farm Sanctuary in the US. Julia and her little ones can now enjoy family life in safety, far away from exploitation and suffering. And, like all pigs, Julia really is a wonderful mother! 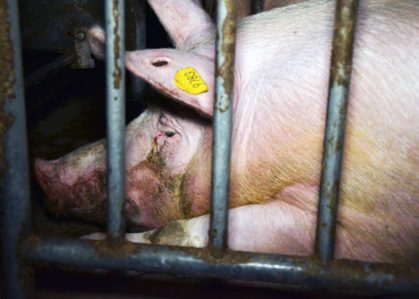 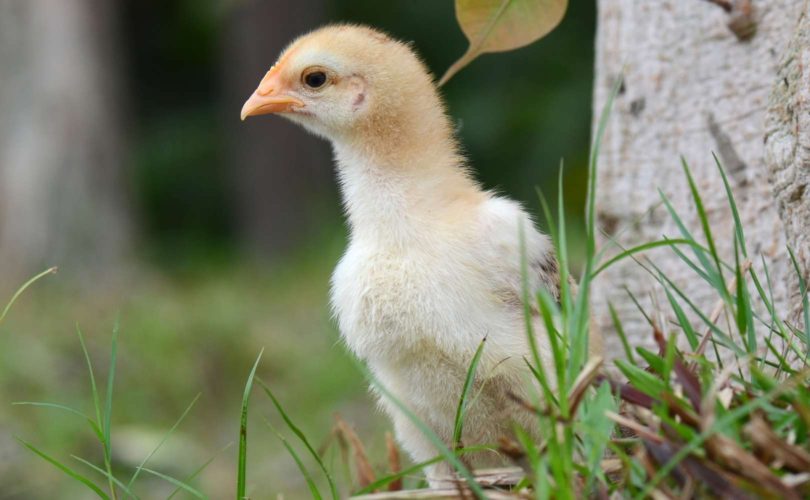 This handsome little guy is Ronnie. He might be very young, but he is already stealing the hearts of the other residents at the sanctuary. It’s no wonder, is it? He is so cute!

Ronnie is a chick, and birds like him are specifically bred to gain a lot of weight very fast, which can lead to broken bones, respiratory problems and heart failure. In their short lives, they remain in huge, windowless sheds, crammed in with tens of thousands of others. Those who are too sick to stand or too weak to reach food are left to die. Those who survive to just six weeks of age are sent to slaughter – 945 million every year in the UK alone.

Thankfully, Ronnie has escaped this sad fate. He will live out his days, scratching and exploring, and lying with his wings outstretched in the sun. 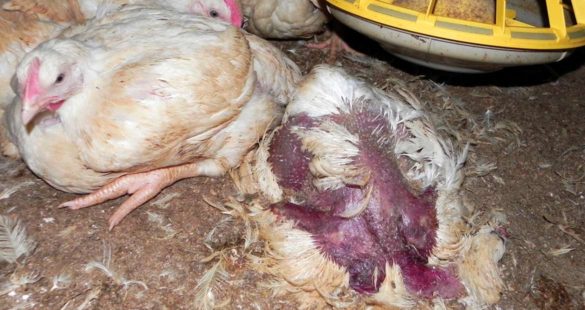 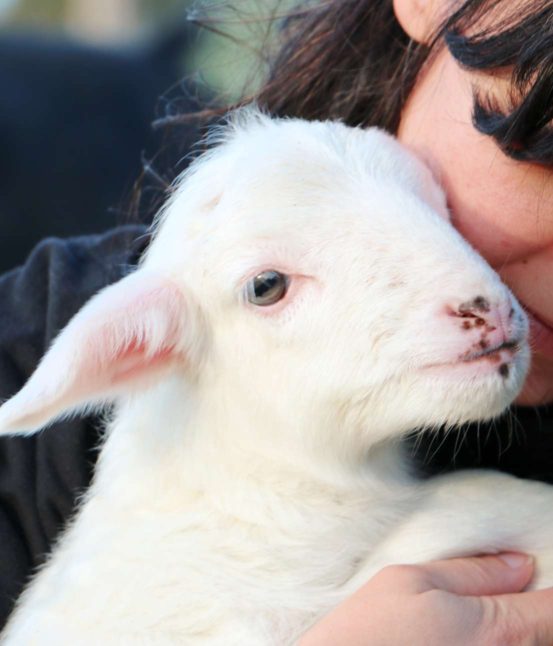 Basilico is a bright little lamb – cheeky, lively and always full of mischief. He was rescued by Animal Equality activists from a lamb breeding facility in Italy, thereby escaping a dreadful fate.

Investigations by Animal Equality inside the Italian lamb meat industry revealed the horrible suffering of these animals: The image and video footage show how lambs, like Basilico endure stress and suffering as they are transported to slaughter – sometimes over thousands of miles. Once there, the terrified animals are herded into the slaughterhouse, many of them suffering from fractured bones and other injuries. The end can be brutal and vicious – slaughter without prior stunning. 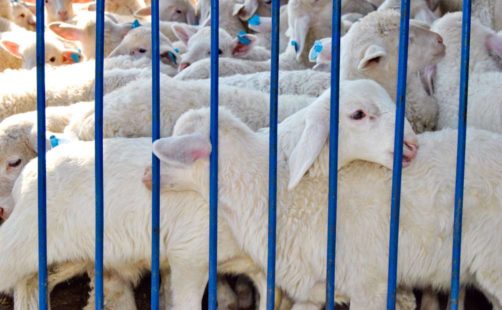 Basilico was spared all that. He can now live a life of freedom, surrounded by people who love and respect him. He can explore the exciting world around him, make friends and enjoy the cuddles of his two-legged friends. 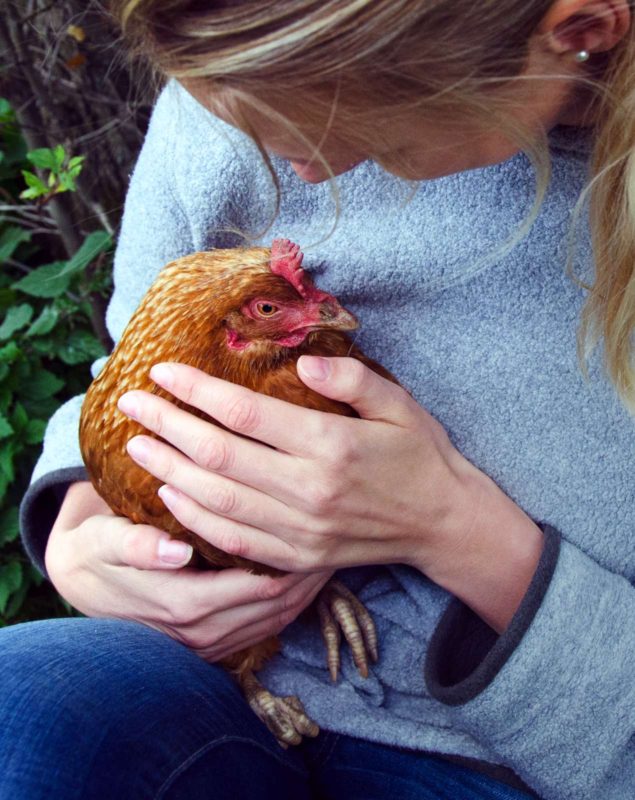 Lisa is an inquisitive little lady. She is interested in everything that happens around her, watches everyone who comes and goes, and spots every tiny movement in the fields and trees. She loves to be tickled and stroked, and is never so happy as when taking a nap on the lap of her two-legged friends, blissfully relaxing in the sunshine.

Lisa was lucky to escape the cruel egg industry. She was rescued by Animal Equality activists from a free-range farm. Until that moment, there had been no hope for her – she would have remained for the rest of her short life in a filthy, overcrowded pen because ‘free-range’ does not mean free. Lisa’s life would only have counted while she continued to lay lots of eggs. As she got older and the number of eggs she produced declined, she would have been sent to slaughter. 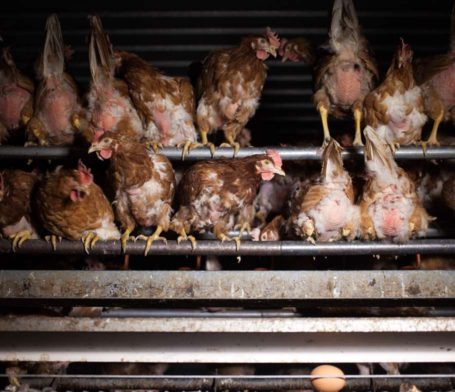 Her brothers’ lives were over before they had even begun. Since male chicks cannot be used for egg production, 30 million day-old male chicks are gassed to death every year in the UK.

Lisa is free now and recovering slowly but surely from the strains. She will probably never forget what she experienced, but her new home and her new friends give her confidence and help the dark memories fade. 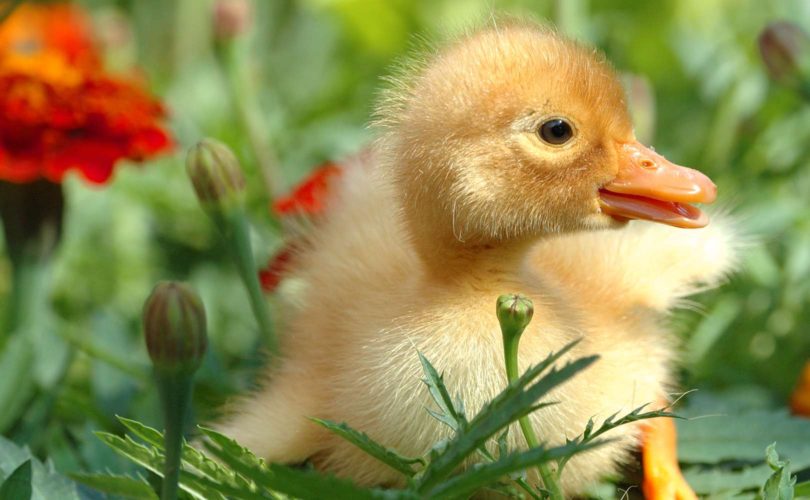 Little Lili’s story is very touching. This tiny duckling caught the attention of Animal Equality activists while they were conducting an undercover investigation inside a German duck fattening farm. All alone and frightened she huddled in a corner.

During her short, miserable life, Lili was never able to feel the warmth of the sunlight on her back. She never experienced the security of a family and she was never able to swim in water, which is an integral part of a duck’s life.

Lili’s fate is that of millions of ducks and geese: cooped up by the thousands inside factory farm sheds without any chance to rest, they never see the daylight and have no opportunity to engage in their natural behaviour.

Nowadays, ducks and geese are specifically bred to gain as much weight as possible in a short period of time. Due to the rapid weight gain, the little ducks become unbalanced. Some of them can hardly stand upright on their legs. Many fall on their backs where they die of thirst. 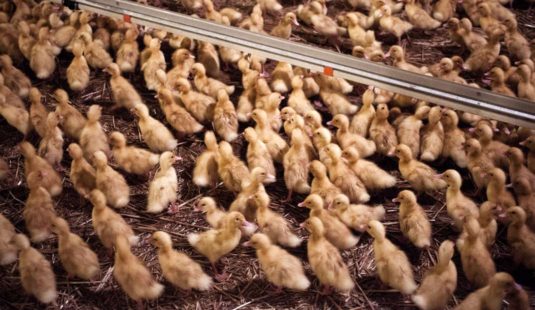 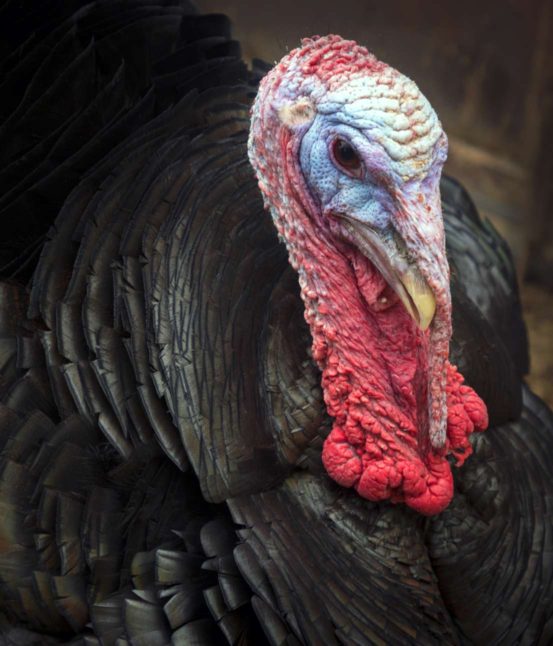 Sir Paul is one of eleven turkey chicks who one morning appeared at the door of Farm Sanctuary in the US. Unknown rescuers had saved them from a cruel fate and brought them to safety.

In conventional breeding and fattening facilities, turkeys are specifically bred to gain as much weight as possible in a short period of time. This abnormal and rapid weight gain causes the animals great pain. Broken bones and heart failure are all too common. 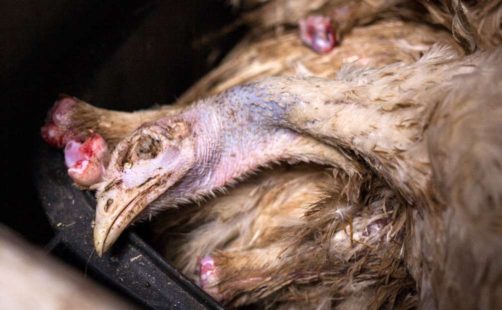 Sir Paul is having the time of his life now. Free from exploitation and suffering, he spends his days exploring and dustbathing. He will grow up in peace and safety to become a large, proud turkey. 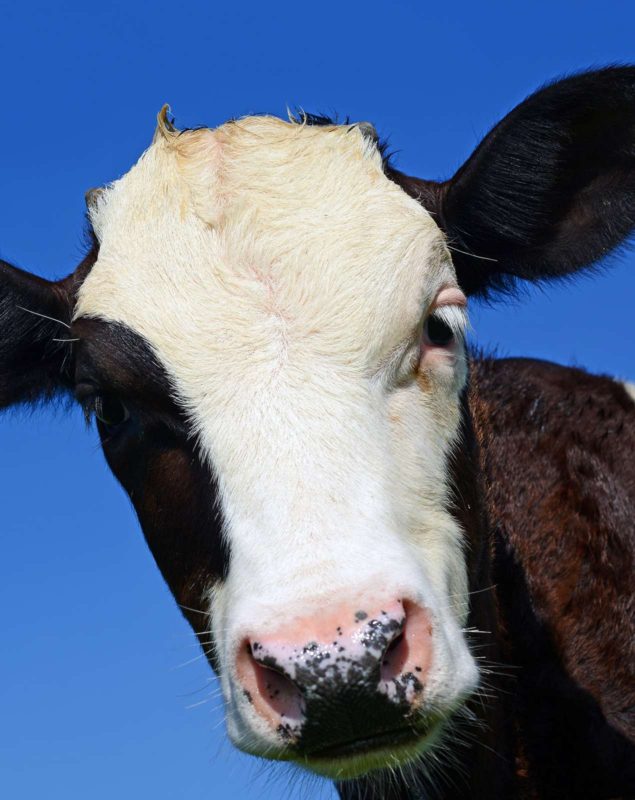 Elsa is a smart, young cow. One morning, she was found standing in the courtyard of an animal sanctuary in Germany. She had escaped from a nearby dairy farm, and it looked as if she knew that she would find safety at Hof Butenland. She had made the right decision, at exactly the right time.

If she had not fled, she would very soon – at the age of around 18 months – been artificially inseminated. From this point on she would have been forced to give birth to one calf a year (to ensure she was producing large quantities of milk), who would have been taken from her shortly after birth. 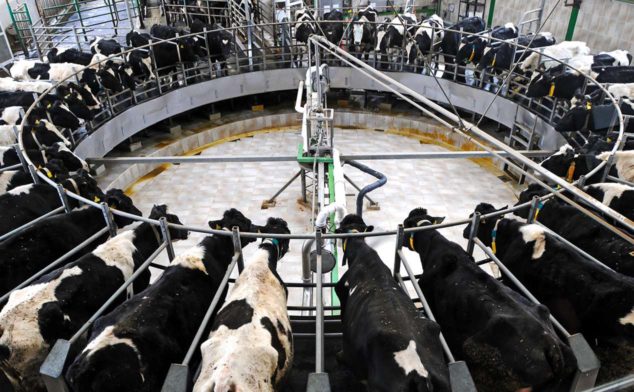 Such a separation is very painful for both mother and baby. Cows on dairy farms cry for their lost calves for days, sometimes weeks – but in vain. Elsa’s milk, which was meant for her little one, would have been taken away from her and sold.

But Elsa took charge of her fate. She wanted to live without pain, suffering and sadness. She is now able to do so surrounded by humans who respect and protect her. 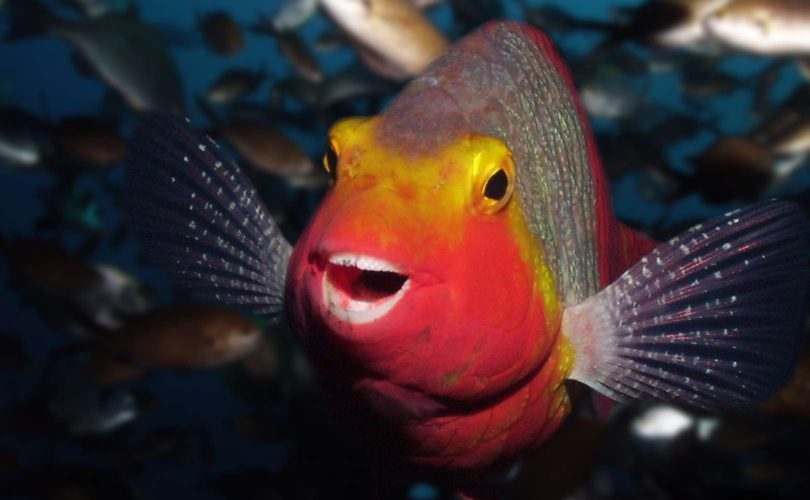 Fish and other marine animals

Despite differences in appearance that exist between fish and other animals, numerous scientific studies have proved that fish can feel pain and stress, as birds, reptiles and mammals do.

Fish are fascinating animals. They have incredible memories and can remember a learned escape route for years! They build complex relationships with other fish and have preferred partners with whom they swim in the shoal.

Some species of fish are able to build small sandcastles to protect themselves from enemies. Others have been observed using tools such as stones to help them feed. Some build small gardens, which they regularly take care of. They support the growth of their favourite kinds of algae, remove less tasty plants and chase other fish away from their patch!

Every year billions of fish are the victims of the commercial fishing industry. Not only fish, but whales, dolphins, turtles and other marine animals also get caught in the huge fishing nets and are thrown back, dead or seriously injured, into the sea as unnecessary “bycatch”. 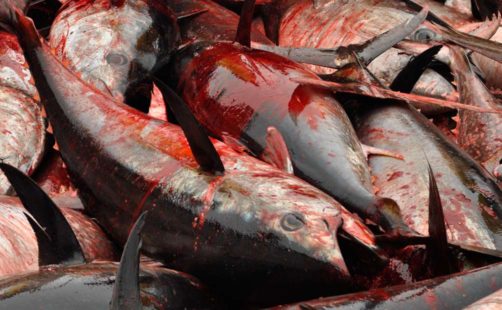